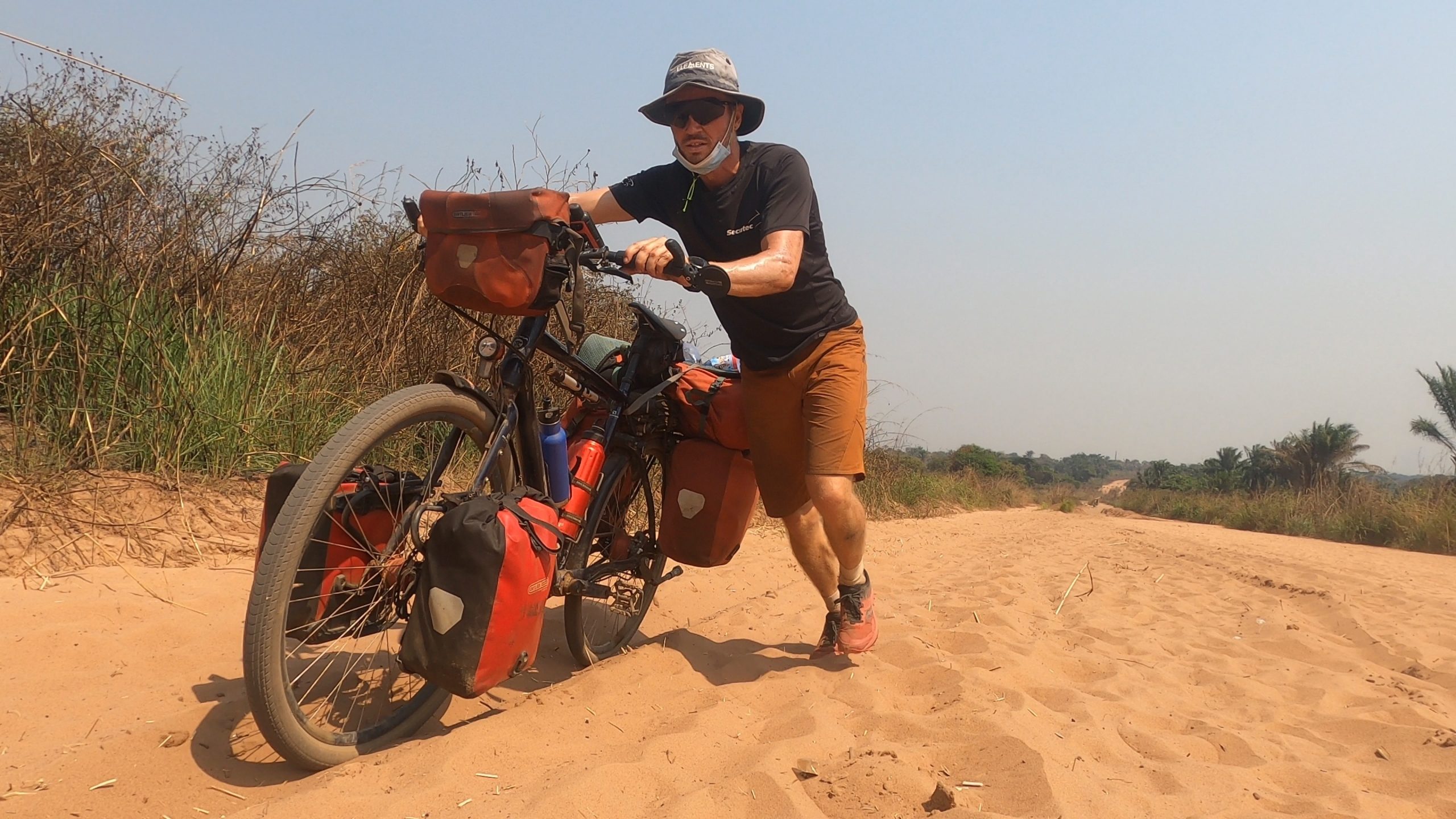 As I was preparing to cycle through the Democratic Republic of the Congo I read different blogs on how people crossed this huge country overland. I got a mixed feeling about it (excitement, fear, …) and when talking to my friend Tracy who lives in Kinshasa, she said “you either love it or hate it”. For the first part I can tell you, it’s really hard, but it’s worth it!

The first challenge was escaping the city of Kinshasa, one of the biggest cities of Africa and easily compared to Lagos, Nigeria. After having cycled here I can say it’s not exactly the same. Because of the stories here of people being robbed and such I was on high guard (just like in Lagos). But the feeling the city itself gave me was okay, I didn’t fear for my life being run over by crazy drivers. To my surprise I get out of town quite easily and once passed the airport I’m continuing the N1.

Once out of town everything calms down a bit. There is still a good asphalted road, but less traffic. It takes me up and down, to another plateau giving me a cooler climate. Cooler at night, the daytime I’m still cycling in 30°-35°C temperatures.  People around are screaming at me, but in a good way. I was afraid that maybe corona would’ve impacted the view on travellers here, but I never noticed that. It is still very intense and people are really enthusiastic, which can be experienced like threatening. My time in Nigeria learnt me that the enthusiasm comes from a very sincere kindness.

Mainly I sleep at farms, villages or catholic missions at the side of the road. Occasionally at a police barrier. I read many bad things about authorities here and was afraid that corruption would bring me into tight spots. Especially the DGM (Immigration) has a bad reputation. I must say, until now I didn’t encounter many difficulties. At least not different than any other country. If I was asked for money, they would just ask after my registration was done in a very polite way. They mainly ask for something to drink (about 40 cents).

Until I reach Tshikapa. A feared city on my list and it became some reality. The nice DGM officers took me to the main office. Where I was treated in a good way and just interrogated by 3 different people, taking a lot of time. Then I could go, but I had to pass by the Intelligence service too, for my safety. The police in the city stopped us and being quite aggressive to me and the DGM officer. Trying to intimidate us. After some discussion we could go. At the intelligence there was another long time of waiting, interrogation and registering. At the end the wanted 50 dollars for that service. We got into a discussion about it as they didn’t want to hand me any official proof that I would pay… I really hate these kind of situations and in the end it took me more than 4 hours to get away from all the hassle.

Still, most of the checkpoints and officials I go to are nice and friendly and are doing a good job. It just takes time and patience but they take their job seriously and feel responsible for me passing through in safety. And I understand that for them it’s not obvious for someone to be cycling a bicycle to Tanzania just for fun, while he could easily pay for a flight there. Even in one village I asked the police if I could sleep there, they slept in front of my tent to protect me (no money asked)!

End of the road

After about 1000 km of asphalt road it stops quite abruptly and there is ar “road” that I can follow. Mainly it’s sand, making it impossible to ride my bike. The only way is pushing the bike for very long stretches and suffering in the heat. Sometimes there is a possibility to cycle but not for long. Going through the villages helps but then I get chased by all the screaming children ( in a nice way). After a couple of days I arrive in Kananga, the capital of the Kasai-Central province. I’m really enjoying this drive through the country. It’s very hard, but worth it.

Thank you very much to my sponsors who make this project possible.